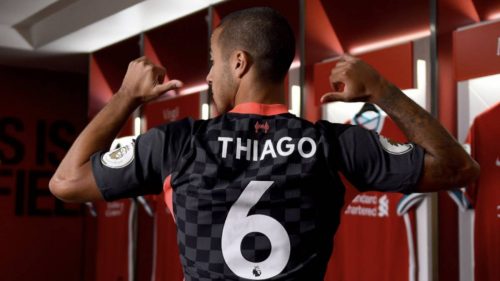 After weeks of speculation that Liverpool would sign Thiago Alcantara from Bayern Munich, the deal finally came to fruition this week. Thiago is now a Red and could make his debut against Chelsea this weekend.

Personally, I didn’t expect the deal to ever happen. While Thiago is a good player that played in a very good Bayern Munich team, it only seemed like the media began paying attention to how good he is once Liverpool were linked to him.

Diogo Jota signed a day after Thiago, joining from Wolverhampton Wanderers. Although the Reds had been linked to him last season, the deal came out of nowhere on Friday night. Suddenly, the Reds have made two huge transfer signings.

Why is Liverpool suddenly buyers in the market?

Liverpool have spent over £72 million in the transfer market with just a couple of weeks to go before it closes. Perhaps the surprise is that Liverpool constantly said they were not interested in signing players and the Boston Red Sox (FSG’s Major League Baseball club) salary dumps of top stars last January made me feel like their stance on not spending was true.

Chelsea’s over £200m spend on players may have forced the team’s hand along with Arsenal’s improvements under Mikel Arteta. This season maybe one with more than just Liverpool and Manchester City fighting for the league title.

Liverpool have stated they do not need to sell any players. However, Harry Wilson and Rhian Brewster are likely to leave before October 5th. Their sales could bring in around £40m. Brewster is rumoured to have a buy-back-clause put into any transfer deal away from Anfield.

How will Thiago fit into the team?

It felt like August’s Champions League matches was an audition for Thiago to be signed by Liverpool. After watching him play on a number of occasions in last season’s Bundesliga and Champions League, he appeared more aggressive than ever in August.

Conventional wisdom should lead us to believe that Thiago will fit into the midfield three in Georgini Wijnaldum’s spot. Liverpool showed last season that a playmaking midfielder was needed. Games against Atletico Madrid, Watford away, and Manchester City away proved Liverpool can be one-dimensional using the full-backs as the main creative hub.

Thiago’s signing also allows Klopp to not sign a new centre-back to replace Dejan Lovren. Why? Fabinho can now slot into central defence when needed with Thiago playing a deep-lying playmaker role akin to Xabi Alonso. Wijnaldum and Henderson would then protect Thiago on both sides. In case you are wondering of Wijnaldum can move to Barcelona as rumoured, the answer is he cannot. La Liga has blocked a transfer for the Dutchman.

What were Thiago’s stats at Bayern Munich?

Thiago has never been a proficient goalscorer at Bayern Munich. He scored just three Bundesliga goals in 2019-20. He was on target with his expected goals total which was at 2.58. He recorded zero assists in 24 league appearances and his expected assists figure was 1.10. The midfielder averaged 0.91 shots per 90 minutes and 0.13 expected goals per 90 minutes.  All three league goals in 2019-20 came in the 18-yard box.

Defensively, Thiago won 38 of 54 tackles. Nineteen of those came in the defensive third, 29 in the midfield third, and six in the attacking third. Meanwhile, Thiago made 23 interceptions in the Bundesliga.

Thiago is a top-class player. He should, barring injury, improve Liverpool’s side. On paper, Jurgen Klopp now has the best overall midfield in the division.

Fabinho is the defensive ball winner, Henderson is a leader and constant runner, Naby Keita is box-to-box, James Milner is the veteran leader, Curtis Jones is the young prospect, Wijnaldum is a non-stop running engine, and Alex Oxlade-Chamberlain is a high-energy attacker. Meanwhile, Xherdan Shaqiri can slot into the midfield as well adding more creativity.

The options are immense for Klopp.