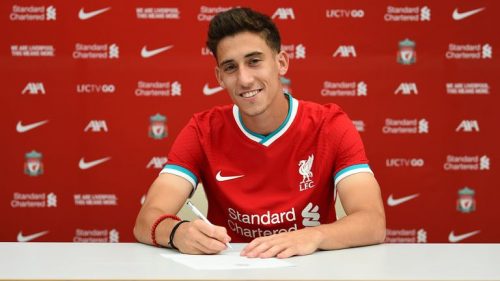 All summer, the talk has been that Liverpool are trying to sign Bayern Munich midfielder Thiago Alcantara. With the focus on the club adding the Spanish player, Liverpool did something they have become known for since Michael Edwards’ recruitment team gained power at the club, they signed a player no one expected them to add.

Left-back Kostas Tsimikas is the latest player to be identified and signed by the club. The defender arrived from Olympiacos for £11.7 million and will fight for first-team opportunities with Andy Robertson. Tsimikas knows that the starting position is Robertson’s, but if the incumbent left-back experiences any fitness issues, then he will get his chances.

Robertson missed just two Premier League games last term due to injury. He started 34 times in the Premier League appearing 36 times. There were plenty of times that Jurgen Klopp had to have Robertson in the side in spite of the left-back having a lingering ankle issue. Now, Tsimikas gives the manager a true left-back alternative to Robertson since Alberto Moreno was at the club.

For anyone that watched Tsimikas play against Wolverhampton Wanderers in the Europa League, you will have seen a promising young defender. The 24-year-old was tasked with corralling Adama Traore, something he did for large spells of the two-legged series.

Tsimikas was linked with other clubs prior to Liverpool inking his name to a contract. He became a regular at Olympiacos in 2018 after loan spells at Denmark’s Esbjerg and Netherlands club Willem II.

Last season, Tsimikas appeared in 46 games in all competitions for Olympiacos tallying seven assists. His ability to get forward is promising and shows Tsimikas should fit in well at Anfield. Klopp’s team uses both full-backs as creative hubs and with both Neco Williams and Tsimikas in reserve, Liverpool will be able to swap out Robertson and Trent Alexander-Arnold without falling off too much.

Tsimikas played against two of Liverpool’s biggest rivals in the Europa League, Arsenal and Wolves, last term. He held his own in each game playing the full 90 minutes in three of the four matches. Olympiacos’ second match versus Arsenal in the last 32 went to extra-time where the Greeks won. Tsimikas played 114 minutes running himself into the ground marking Arsenal’s forwards.

He also appeared in Champions League group stage matches versus Tottenham Hotspur and Bayern Munich. He played 90 minutes in all four of those games and tallied an assist versus the Germans.

According fbref, Tsimikas helped Olympiacos record 2.44 points per match in the Greek Super League. The club scored 50 goals with Tsimikas on the pitch while allowing just 12 strikes against.

This Is Anfield reported that Liverpool had Tsimikas on their radar as far back as 2017. The deal wasn’t out of left field as much as it appeared and Tsimikas was on the transfer wishlist along with Norwich City’s Jamal Lewis. Tsimikas’s stats in tackles, interceptions and dribbles are very similar to that of Robertson.

Both Liverpool and Olympiacos played in the Champion League group stage in 2019-20. Here is how Robertson and Tsimikas compared: