Liverpool’s dramatic win on Saturday at Anfield against Leicester City pushed the team’s winning run to eight straight matches to start the Premier League season. The Reds outplayed a defensively stubborn Leicester City throughout the match with only a late lack of concentration allowing James Maddison to equalise.

James Milner’s second-half stoppage-time penalty gave the Reds the victory after Sadio Mane was rightly ruled to have been fouled. The mental strength of Liverpool’s players is through the roof and Saturday’s late winner (their 34th second-half stoppage-time winner in Premier League history) was more proof that the Reds resemble the teams fans used to see under Shankly, Paisley, and Dalglish. 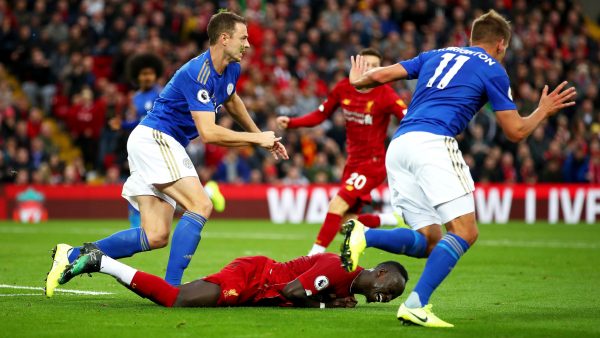 It isn’t a popular opinion coming out of Saturday’s match, but Leicester City were overall poor. They managed just two shots with one on target. The Foxes did stifle Liverpool in the final third, but Jamie Vardy (one dimensional) and company struggled to get clear shots at goal.

Dejan Lovren stepped in for the injured Joel Matip and excelled. After Liverpool refused to sell Lovren to Roma for a price that wasn’t suitable, it wasn’t expected he would play much of a first-team part. Yet, Lovren showed against Leicester City that there is a place for everyone in the Liverpool team.

Liverpool’s season is reminiscent of their last title-winning year. The Reds last won the league title in 1989-90 and that season saw Liverpool start unbeaten in eight straight league matches.

The big difference between that title-winning start 30 years ago and this season is the Reds have won eight straight matches this time around. Thirty years ago, Liverpool managed five wins in their first eight games with three fixtures ending in draws.

Jurgen Klopp will hope to avoid the form Dalglish oversaw in late October and early November in 1989. The Reds lost three of four league matches but got back on track against Millwall and Arsenal at the end of November.

Liverpool go into the October international break with three massive matches in the league to follow. The Reds visit Old Trafford on 20 October to play Manchester United. Liverpool will host Tottenham Hotspur seven days later at Anfield. Despite the issues both Manchester United and Tottenham Hotspur have right now, they will be up to play Liverpool.

After visiting Villa Park on 2 November, Liverpool host Manchester City. If Liverpool can reach mid-November without a loss, Liverpool will have completed the first third of the season unscathed.