Liverpool kick off the defence of their sixth European Cup/Champions League trophy defence on Tuesday night in Italy against Napoli.

Carlo Ancelotti’s Partenopei head into the fixture with revenge on their minds. It was Liverpool who put Napoli out of the competition last season on the final group stage matchday thanks to a dramatic finish. Had it not been for that victory at Anfield, there would have been no sixth European Cup/Champions League trophy.

Liverpool and Napoli are joined by Austria’s Red Bull Salzburg and Belgium’s Genk in Champions League Group E. The Reds and the Italians are expected to be the two sides to progress to the knockout round, but Red Bull Salzburg shouldn’t be counted out. Although the offseason saw them lose manager Marco Rose and several key players, they are a good team.

Divock Origi is the latest Liverpool player to suffer an injury. The Belgian twisted his ankle against Newcastle United at the weekend and is set to miss around two weeks of play. Origi has been replaced in the squad by Rhian Brewster. 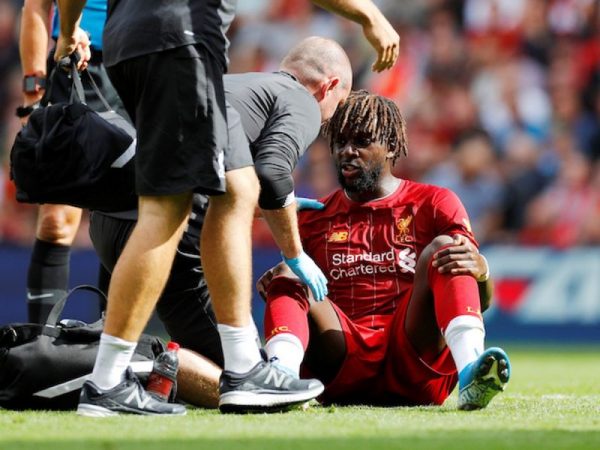 Alisson Becker, Naby Keita, and Nathaniel Clyne are all recovering from their current injuries. Keita is close to returning to full training. The midfielder has been sidelined since mid-August when he suffered a groin injury in the final training session prior to the UEFA Super Cup.

Alisson is also supposed to return to full training and manager Jurgen Klopp recently stated it will be the next international break in which he returns.

Ancelotti will be without captain Lorenzo Insigne. The winger scored the winner at the San Paolo against Liverpool in last season’s Champions League group stage. He is suffering from a muscle strain.

Striker Arkadiusz Milik is also out with an injury. He was supposed to return to full training on Monday which doesn’t give him enough time to get fit for Tuesday night’s Champions League group stage matchday 1 fixture.

Napoli and Liverpool have played six times in all competitions since 2010. Liverpool are undefeated in four of the six matches with three games ending in victory. Both of Napoli’s wins came in the last 12 months. They defeated Liverpool at the San Paolo last season in the Champions League group stage as well as in preseason when they hammered Liverpool 5-0 at Murrayfield in Edinburgh during a high-profile friendly.

That friendly saw Liverpool without many of their stars including Sadio Mane, Mohamed Salah, and Roberto Firmino.

The Reds are in great form heading into Tuesday night’s match in Naples. The Reds are six matches unbeaten this season in all competitions. They currently sit on top of the Premier League with a perfect 15 points from 15 possible and are the league’s only undefeated team.

Napoli are sixth in Serie A with their only blemish being a loss to Juventus. The Partenopei have collected six points from nine possible and won at the weekend at home against Sampdoria, 2-0.

Can Liverpool continue their brilliant start to the season or will Tuesday night end like last season’s trip to the San Paolo?

One thought on “UCL Preview: Liverpool kick off Champions League trophy defence against Napoli at the San Paolo”