Divock Origi landed awkwardly after planting his foot in the turf on the touchline against Newcastle United on Saturday during the first half of Liverpool’s 3-1 win at Anfield.

The Belgian forward went down on the sidelines and received treatment. After coming back onto the pitch, Origi went down once more and was substituted for Roberto Firmino in the 37th minute due to an apparent ankle injury.

Although Origi left under his own power, there is fear that it could be more serious than just a twisted ankle. Goalkeeper Alisson Becker walked off the pitch on his own accord against Norwich City in the first match of the season, but he has been out since sustaining that injury in early August with it appearing more serious than expected. 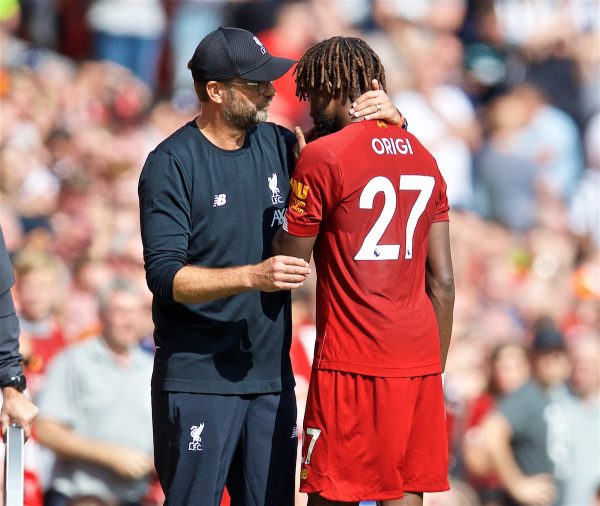 “Unfortunately, Div twisted his ankle early in the game and had to then come off,” Klopp said.

“I think he will have a scan today or whatever and then we will know more.

“Of course, that’s not cool, he is in really good shape, so hopefully, they will not find a lot in the scan.”

Origi’s injury influenced Klopp and his coaching staff to relay word to Liverpool’s under-23 team who was playing against Derby County U23s a few hours later in the day. Rhian Brewster was chosen in the Liverpool U23 side but was removed 15 minutes into the match.

It appears Brewster will be taken to Naples for Tuesday night’s Champions League group stage matchday 1 showdown against Napoli. Brewster will travel with the team but whether or not he will be picked for the squad is unknown at this point. The U23 squad drew 3-3 with Derby County.

Origi joins Naby Keita, Alisson, and Nathaniel Clyne on the sidelines with injuries.

One thought on “Divock Origi to undergo scan on twisted ankle”