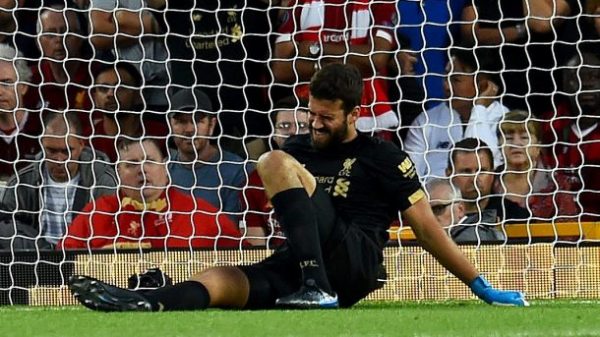 Liverpool goalkeeper Alisson Becker has been ruled out for the next six weeks of football. The Brazilian went down in the first half of Friday night’s Premier League season opener against Norwich City after making a save and clearance.

Although Alisson walked off the pitch and refused to be stretchered off, ESPN claim he used a wheelchair to leave Anfield.

When will Alisson be back?

Alisson could be back after three weeks out recovering from the injury, according to This is Anfield. It is claimed six weeks is the maximum he will be sidelined. However, the injury, a calf tear, could still take longer for him to recover from.

Following the match, manager Jurgen Klopp immediately confirmed Alisson had suffered a calf injury. Many onlookers had speculated Alisson had ruptured his Achilles, however, he would have needed to be stretched off in that case. Klopp also confirmed Alisson would play no part in Wednesday night’s UEFA Super Cup match against Chelsea.

Alisson, who has played non-stop football for nearly two years now due to club and country involvement, suffered a calf tear possibly due to overuse and constant playing.

Thank you all for the messages! Will be back as soon as possible and stronger!! 💪🏼🙌🏼🧤 #YNWA

The Liverpool No. 1 is likely to miss around six Premier League and Champions League matches on top of the UEFA Super Cup. Liverpool will play Chelsea in the Premier League on September 22 and it could be Alisson’s return date if fully fit.

Adrian to step in for Alisson

Adrian, who signed for Liverpool on a free transfer earlier in the week, came on for Alisson following the injury. The Spaniard made two saves after entering the match.

Adrian’s distribution was lacking but should improve with more familiarity with the side. In addition, Adrian’s pace with moving the ball around was a bit slow. It is another area that can improve with more game time and training.

Andy Lonergan could be officially signed by the club as a back-up goalie on a short-term contract until Alisson returns.