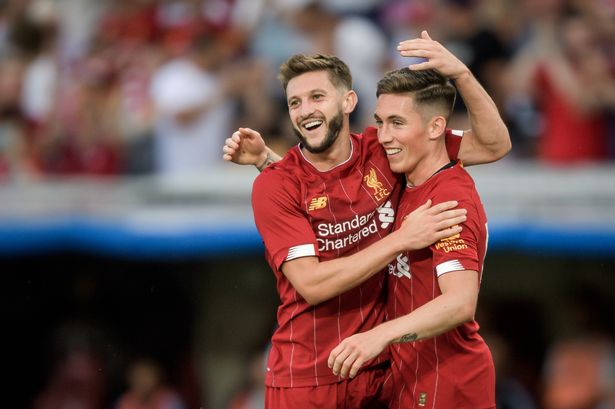 Liverpool wrapped up their preseason with a 3-1 win against France’s Lyon on Wednesday night in Switzerland. Although the Reds started slowly and Dejan Lovren and Joe Gomez looked suspect in defence, Liverpool settled down after the opening 10 minutes.

Lyon opened the scoring thanks to a penalty from Memphis Depay. The Dutchman converted a spot-kick following a ridiculously given penalty against Alisson Becker.

The Reds got going from there as Roberto Firmino scored on 17 minutes. A Joachim Andersen own goal courtesy of a great cross from right-back Ki-Jana Hoever gave the Reds the lead.

Harry Wilson’s brilliant goal from about 20-yards gave Liverpool the third goal in the second half.

There were numerous positives on Wednesday. Although the opening 10 minutes made you feel like “here we go again”, Liverpool settled in.

Right-back Hoever was very impressive getting up and down the right side supporting Mohamed Salah. Yasser Larouci started on the left side and looked far better than in his appearance against Borussia Dortmund earlier in the preseason.

It was great to see Firmino and Salah back, but Naby Keita really stole the show with his movement in midfield. Wilson was also good despite seeing less of the ball compared to his fellow attackers. His 20-some yard goal was excellent and shows just why the left-footed winger needs a place in the first-team and shouldn’t be sold.

Late in the second half, Liverpool’s back four of Andrew Robertson, Joel Matip, Virgil van Dijk, and Trent Alexander-Arnold joined the fray and looked good playing alongside each other.

Finally, 16-yard-old Harvey Elliott did not look out of place and could very well get a chance in the first-team during the season.

Despite getting praise during preseason, Gomez struggled with the pace of Lyon’s attackers. The combination of Gomez and Lovren together just looked out of sync.

Matip and Van Dijk should still be Jurgen Klopp’s starting centre-backs, and it appeared with them coming on in the second half that the duo will start against Manchester City on Sunday.

Okay, it may seem harsh, but Adam Lallana in the pivot role just doesn’t feel right. Despite Jason McAteer praising Lallana’s play against Lyon, it felt like Liverpool pre-Fabinho. Lallana’s play, pace, passing, and tackling were reminiscent of Jordan Henderson’s at one time. Henderson’s move out of the pivot and next to Fabinho plays to the captain’s strengths.

One of Liverpool’s biggest defensive issues was not having a proper defensive midfielder until Fabinho’s arrival. Lallana feels like a step backwards when playing in that role. He plays with his back to goal and passes to his defenders often.

With Fabinho on the pitch in the second half, the sureness and strength of the spine looked so much better. Can Lallana still play a part this term? Yes, but for me, not as the single pivot at the base of the midfield.

Say it quietly but Adam Lallana in his new role looks an entirely different beast.
He is trying to be a deep lying playmaker and also initiating the press in the middle of the park.

This could be his resurrection.

I know a lot of Liverpool supporters have already bought into Lallana’s new role, but I’m still holding out.

2 thoughts on “Liverpool 3-1 Lyon: The good, the bad, and the Djimi Traore”