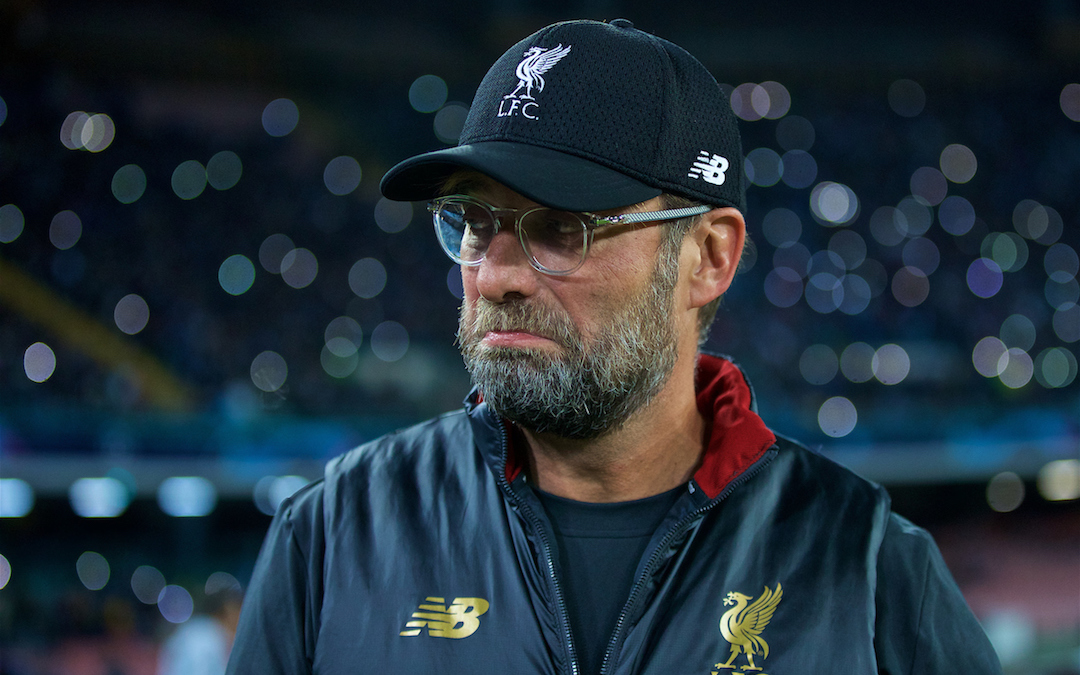 Liverpool are in a precarious situation after losing 2-0 to Red Star Belgrade on matchday 4 of the Champions League group stage. The Reds are now level on points with Napoli, but sit second due to goal difference.

Not only were Liverpool shutout in Serbia on Tuesday night, but they rarely appeared likely to score. To be fair, Red Star looked like a completely different team to the one Liverpool had played two weeks prior. Not only were they defensively organised, but Red Star were capable of mounting a sustained counterattack. Red Star have now taken four of six points from visitors to its extremely intimidating stadium. But Liverpool should have offered more playing away from home.

What went wrong for Liverpool?

Unfortunately, Liverpool had put themselves behind the 8-ball before even travelling to Belgrade. The club’s decision to leave Kosovo-born midfielder Xherdan Shaqiri behind may have had merit, but it left Klopp without one of his most in-form players. Shaqiri shined against Red Star on matchday 3 and was the creative hub in Liverpool’s midfield.

In his absence, Klopp made one of three poor coaching decision as thoughts of easing past Red Star must have been on the manager’s mind. Klopp again started midfielder Adam Lallana, and once again, the Englishman failed to produce anything of value for the Reds. Lallana’s injury history has taken its toll and his performances this season have been appalling.

Played on the left side of a three-man midfield, Lallana completed just 66 percent of his passes. In addition, Lallana completed zero tackles, according to WhoScore.com. Meanwhile, his touch continues to elude him and he was dispossessed three times before Klopp finally hooked him on 79 minutes.

Klopp had Naby Keita on the bench but was reluctant to play the midfielder. Just back from injury, Klopp had one eye on the Premier League at the weekend. Yet, he also had Fabinho in reserve and could have deployed the defensive midfielder. The Brazilian may be in Klopp’s doghouse, however, after comments of being “bored” at Liverpool were published in French newspaper Le Parisien last week. Moreover, Fabinho’s teammates didn’t seem confident in him during the last 30 minutes against Arsenal on Saturday. It seemed the team did everything not to pass to the midfielder.

Liverpool’s goals dried up in Serbia

But Klopp’s decision to start Lallana wasn’t his only mistake. Roberto Firmino was dropped in favour of the hot and cold Daniel Sturridge. The move almost paid off early and could have changed the outcome of the game, but Sturridge skied a sitter over the crossbar. He should have scored and Liverpool would have led 1-0. Instead, his embarrassing miss set the stage for a lacklustre first half. Sturridge was replaced by Firmino at halftime and the No. 9 showed far more ambition despite rarely touching the ball.

Trent Alexander-Arnold started at right-back as Joe Gomez had been suffering from a slight knock. Alexander-Arnold, as he has since joining the first team, looked vulnerable against an aggressive attacker. He completed just 69 percent of his passes before being taken off at halftime. Gomez came on for him and looked far more confident. Gomez completed 84 percent of his passes while making one tackle.

In Klopp’s defence, the players deployed should have filled in without worry. However, Lallana’s poor performance against Cardiff showed he isn’t up to the standard the team needs to play currently. Tuesday’s 79 minutes was further evidence Lallana shouldn’t be near the starting XI.

Liverpool will travel to Paris to play Paris Saint-Germain on matchday 5. It is a vital game for the Reds and they must avoid defeat at all costs. Liverpool have already beaten PSG once in the Champions League, but playing in Paris will be a difficult challenge. A loss could see the Reds on the verge of Champions League elimination.